To give our lovely readers an interesting review, something a little different than what we usually do, Marcey and Dan have sat down and give their thoughts on THOR: THE DARK WORLD as a conversational piece, while still reviewing the film. Enjoy the back and forth between these two. 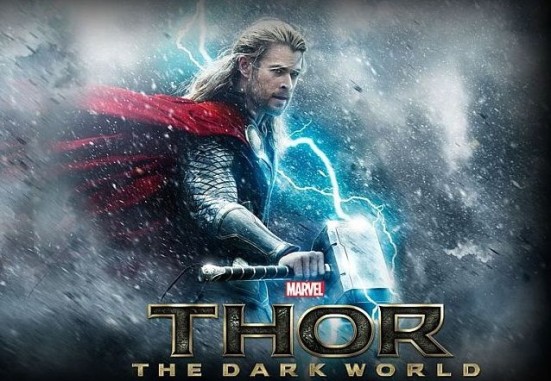 Marcey: Welcome folks, to our discussion review of THOR: THE DARK WORLD, Marcey here with my trusty sidekick Dan. So, the sequel to THOR has now hit all the multiplexes and cinemas, for me personally my expectations were right in check. I saw the trailers and aimed to stay away from news articles about the film. I wanted it to feel fresh, and my viewing of the film did feel fresh. How about you Dan?

Dan: Hey Marcey! Yeah I think I would have to agree that my expectations of the film were met. I think from the first trailer I was a little put off on the film and then the second trailer got me more excited, so I think it kind of averaged out in the end.

Marcey: As far as story for this one, I felt it was far more intricate than the original. It wasn’t as clear cut as to what was going on, with things getting revealed as the film went on. Did you feel that way as well?

Dan: I am not sure if intricate is the word I would use as I did find the story a tad predictable. I would probably say it had more depth to it than the first for sure. I think that a lack of knowledge of the original comic book source material might make it appear as intricate, not that I really know much about the Marvel universe, but like I said, I found it a little predictable.

Marcey: There was certainly a lot to it, we get introduced to the dark elves and the big evil for the film Malekith (Christopher Eccelston), their intentions aren’t good as they want to use a weapon called The Aether to send the universe into darkness. Odin’s father stopped them, but The Aether can’t be destroyed and it gets found again, coincidentally by Jane Foster (Natalie Portman) on her search to find Thor (Chris Hemsworth). That is just a taste of things to come, yeah?

Dan: (potential spoilers) Yeah for sure. They definitely set up for an interesting story. At the end of the film I was kind of left wondering if they had rigged the story too much to set up a Gaurdians of the Galaxy movie rather than just make a simple Thor movie about Thor, Jane, etc. 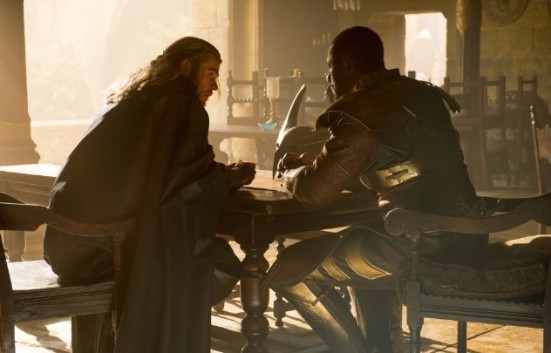 Marcey: I think using The Aether as the element to cause chaos and give Thor something to fight, and having Jane affected gives him something to fight for. The danger is very real and very large, which probably left viewers wondering why the Avengers weren’t involved and unlike in IRON MAN 3 we don’t get much of an explanation.

Dan: (potential spoilers) Yeah, that is certainly a question I heard many people ask. Why weren’t the Avengers involved, especially when the conflict made it to Earth. I couldn’t help but feel that this film stepped into RAIDERS OF THE LOST ARK territory. My recollection of the film might be a little fuzzy, but Jane gets affected by the Aether which is then transferred to the bad guy who is then defeated. Jane’s character is almost similar to how Indy really has no material impact to the outcome of Raiders.

Marcey: If Jane hadn’t of found The Aether, Malekith would never have awoken. So no …

Dan: I actually thought that Malekith awoke simply because of the convergence of the 9 realms.

Marcey: That too, but it was because of Jane he found it.

Dan: I will need to re-watch it at some point. I remember walking away from the cinema with more questions than answers.

Marcey: Fair point, I think there are bits that don’t entirely make sense when you think too much about it, an issue a lot of films have of course.

With this film, it felt good to be back at Asgard, with characters we’ve been with before and the roles of Heimdall (Idris Elba) and Frigga (Rene Russo) were expanded from the first, much needed too.

Dan: Yeah I think that was the most logical step was to bring the majority of the story line to Asgard and it was great to see that they kept the design of Asgard very close to what it was in the first film. One of the early reports that I read when it was revealed that Kenneth Brannah was not returning to the director’s chair was that the incumbent director wanted to change the look of Asgard quite significantly, so I am glad that they actually kept with the design established in the first movie. 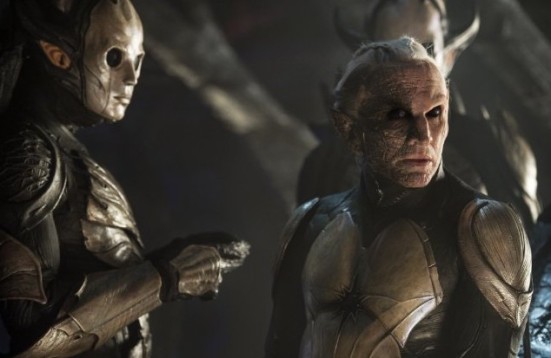 Marcey: It kept the flow going, which was good. The film does feel a lot darker than the first and humour felt slightly toned down, it really came in the form of the side characters and there are a few quips here and there. It worked for me personally, I liked the blend of the serious and humour, as well as the blend of location also.

Dan: Yeah I thought they balanced it quite well. After talking with some people I heard that Joss Wheddon was brought in to do some re-writes of certain scenes and I am under the impression that he was the one that injected some humour back into the film along with a certain cameo appearance.

Marcey: Which we will not reveal *wink* I do believe Whedon also added in more Loki (Tom Hiddelston) stuff, his role was quite large here and he’s basically in it as much as Thor. Let’s be perfectly honestly here, Loki is the only well developed villain in the Marvel movie universe, he’s the only really memorable one. His role here is very different though, and it really needed to be as well.

Dan: I think Loki is well developed mainly because unlike any other Marvel villain he has had the most number of movies and screen time to be developed properly. He is really the only villain to span across multiple Marvel films. I thought Loki’s presence in this film was a bit too much though and it really smacked more of trying to milk the Loki cash cow rather than continue the story. I think if Loki hadn’t been included in THE AVENGERS then I wouldn’t have walked away with that feeling. I think that coupled with the SDCC stage appearance really for me is starting to be off putting. I can no fault Hiddelston’s take on the character or performance. He is exactly how I envisaged a real life portrayal of the character based upon the Thor cartoons I watched as a kid, but I am starting to get sick of him and the overall feeling that the character is really just being used as a cash cow as opposed to serving an overall plot or story arc. 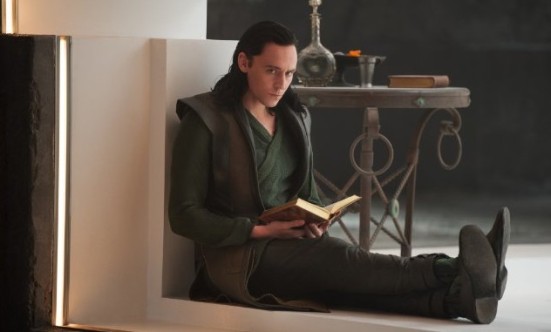 Marcey: I felt Loki was one of the best comic book villains after the first THOR film, he was well developed there and we really understood his motivation and he believed in what he was doing. It made sense to have him in THE AVENGERS as well, give us a known villain rather than another under developed forgettable one. Here I do agree we had too much Loki but at the same time I do love the character and I loved seeing a different side to his relationship with Thor as well as his mother.

Dan: I think that it would have been better to have Thanos in the Avengers rather than relegated to a short appearance in the after credits sequence, but I can understand why they went with Loki. Never the less we’re here talking about Thor 2… so let’s move on.

Marcey: Yes, with Malekith I felt he was a very bland villain, terribly under developed and not really memorable. Not to fault Christopher Eccelston who I felt was good and did the best he could, he just was written very well.

Dan: Yeah… I thought that he was very generic and really didn’t stand out amongst the other elves

Marcey: That said though, I felt overal this film was on par with THOR, they both have different strengths and weaknesses. They gave this film more time with the romance between Thor and Jane, they kept up the science angle with Jane, Erik (Stellan Skarsgård) and Darcy (Kat Dennings) as well, giving them a valid excuses to be there. The stuff with Thor and his father was nicely handled as well, as I said earlier I liked that we had more Heimdall. I liked the action scenes, and how things came together at the end, it was a fun adventure film in my eyes.

I may add I thought the performances were extremely well done, Chris Hemsworth is right at home as Thor, as Tom Hiddelston is with Loki. Natalie Portman also felt a lot more comfortable as Jane, she really fit into the role without needing a second thought. 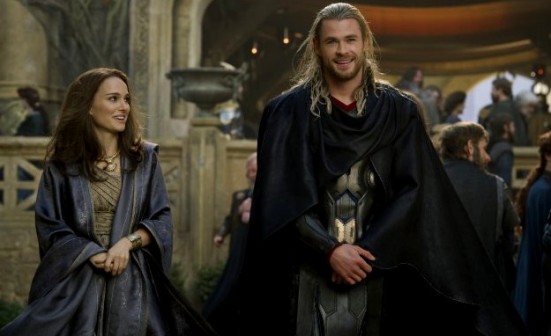 Dan: I was hoping that they would actually explore the relationship between Thor and Lady Sif (Jaime Alexander) more. In the comics Jane is more just the other woman really. They kind of alluded to it, but really didn’t take it anywhere when they should have. I thought the whole birthday suit thing with Erik was unnecessary and really didn’t serve to define or enhance the state of the character. The could have easily done the same thing with his clothes on and would have come across as funny, but not ridiculous.

Marcey: I did find it interesting that they hinted at stuff with Sif, but it never really went anywhere. But hey we got our fix of an awesome character, played perfectly by Ms Alexander. I find it hilarious that I have seen Stellan Skarsgård naked as much as I have, the man can’t keep his clothes on. I wonder whether he’s had more nude scenes than his son Alexander Skarsgård who appears nude in every episode of True Blood basically. I am with you, it was a bit much, done for comic relief, I guess it wanted to show the after affects his character felt after THE AVENGERS.

Dan: Overall I thought that THOR 2 THE DARK WORLD was an enjoyable movie. It certainly was written with the much grander Marvel movie universe in mind, one might argue at the expense of the movie itself. If people felt confused by some aspects of the film I think that can be fairly well attributed to requiring comic book knowledge and knowledge of the Marvel universe. Having said that it really doesn’t detract overly from the film. Ultimately I would say it was a good movie with some notable performances, but it wasn’t a great movie. Unless they bring out something epic I can see Thor 3 being the last of that hero’s solo outings; assuming they do a THOR 3. Overall I would give it 3.5 out of 5

Marcey: I think THOR: THE DARK WORLD is a lot of fun, it has its issues (mainly script) and it easily could have been trimmed down by 10 minutes, but overall it’s a solid inclusion into Marvel’s filmverse and I give it a solid 4 out of 5

One thought on “[Review] Thor: The Dark World with Marcey and Dan”