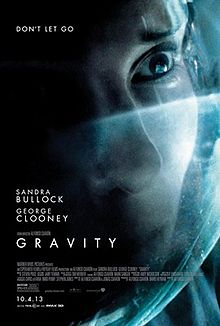 Even though he has made only seven films in the last 22 years, director Alfonso Cuaron has deservedly built himself as one of today’s most acclaimed and accomplished directors due to his very impressive resume of his work, particularly his previous film the 2006 sci-fi masterpiece CHILDREN OF MEN. Now after a 7 year long wait, Cuaron is back with his follow-up film, which may also be his most ambitious film of his career so far: the 3D sci-fi/thriller GRAVITY. So was the film worth the long wait? Read on and I’ll tell you!

The film tells the story of Dr. Ryan Stone (Sandra Bullock), a medical engineer who is on her first expedition into space along with a couple of other astronauts, including expedition’s veteran leader Matt Kowalski (George Clooney). At first everything seems to be fine but while they are fixing the Hubble Space Telescope, they receive word from Mission Control that a Russian satellite has exploded and the debris from it is heading towards them. After their shuttle is destroyed by the debris, Stone and Kowalski get stranded in space. Unable to get in contact with Mission Control and knowing that they have only a limited supply of air left, they both have to work together to find a way to get back to Earth.

While the synopsis may seem pretty simple and straight-forward (I would be lying if I said it wasn’t) but in Cuaron hands, he takes this simple premise and turns it into one of the most intense and visually stunning films that I’ve seen at the cinema so far this year. Cuaron simply does a truly amazing job at creating an intelligent and realistic sci-fi film about what it is like to be up there in space, while also making a terrifying experience about how dangerous  being an astronaut can be.

In a way, I wouldn’t go as far as to even call this a *science-fiction* film. As cheesy as this is about to sound, it’s almost as if Cuaron wanted to make the *science-fact* film. While watching the film, you can definitely see him going for that approach. Just every single detail about this film, from to how everything works in space to the space stations/shuttles/astronaut gear, feels very authentic and realistic (one in which is that since sound can’t travel through space, whenever an explosion happens onscreen you can’t hear it). Also one aspect about the film stood out for me the most (and in my opinion one of the true stars of the film), was definitely Emmanual Lubeski’s truly incredible and breathtaking cinematography. Every shot he does here is just perfect, the first 12 minutes are done in a terrific long continuous one-take shots (Lubeski actually does this technique a few times during the film). Trust me when say this, I don’t think you’re going to find another film this year that has a brilliant first-rate cinematography job like the one in this film (if he gets nominated for Oscar for his work here, mark my words he is definitely going to win for sure).

While GRAVITY is a true technical marvel, it definitely isn’t a film that is style over substance. At the centre of it is a powerful, engaging and surprisingly moving human drama about two people who get caught in a very impossible situation where they must find a way to survive. This is the true heart of the story and it helps that Cuaron cast two great actors like Sandra Bullock and George Clooney as these characters. The film successfully gets us invested with these two people and we care about what happens to them. If this aspect didn’t work, I don’t think the film could have been as an effective experience as one without them. Clooney does a great job as Kowalski, he this trademark coolness, humour, likability and commanding presence to the role.

However the film really does belong to Sandra Bullock, who gives one of her best performances here. At first not sure how we feel about her but as the film goes on and layers of her character are revealed, we become very emotionally invested into her plight. It truly is a great character for Bullock and sinks her teeth into the role. Also the 3D in this film is just fantastic and it really makes you feel like you are there in space. I know that there are people who have a problem with the format (personally I like it but only when it’s done really well) but this is one of those cases where you have to see it in 3D and as well as seeing it on the biggest screen you can find, believe me it is worth it. Plus the CGI was absolutely incredible and realistic (just give it the Oscar right now!), the sound design was both believable and effective and the score by Steven Price was just phenomenal, it’s definitely one of the best scores I’ve heard this year.

Now you’re probably wondering if there are any aspects that I didn’t like about the film, to be honest I don’t really have any. If I do, they are just very minor. One in particular is that there is a moment that happens in the 3rd act that I thought felt a bit out-of-place. That’s not to say that it was bad, it wasn’t. I get what the purpose and intent of what this scene was for but I felt that it wasn’t really needed. Also while the film’s script was really solid, I wish that Cuaron didn’t a little bit more meat to it since it was pretty simple and straight-forward (not that there is anything wrong with that).

Overall while I don’t think GRAVITY is Cuaron’s masterpiece (that title still belongs to CHILDREN OF MEN), it still very much a truly excellent and thrilling film that highly recommend everyone to check out. Also as I said before, make sure you see it on the big screen in 3D as it was intended to be. It’s definitely one of 2013’s best films and I guarantee that you will find it just as riveting as I did.