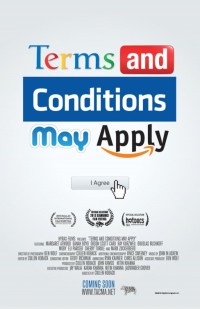 As an avid watcher of all sorts of documentary cinema, I was really struck by TERMS AND CONDITIONS MAY APPLY. This is a film that plays as a cautionary journey, one that every user of the internet needs to watch and take on board what the film has to say. How much do you actually know about all the different things you use online, from Google to Facebook? Do you ever read the Terms And Conditions before accepting them?

What is really written in them and what are you actually agreeing to? The film aims to bright to light that last question, and it does really show that the info you put out over social media is used for reasons you may not even think about.

You’ll be surprised at how much privacy you don’t have online, and who can get access to what you put out there. While some cases explored are likely once off incidents, they do make one think about the consequences of a single Tweet or Status Update.

There really is a lot of paranoia out there, and with what is out there and what information gets gathered it is no real surprise. We all value our privacy, and the internet whether we like it or not is taking that away. There is an astounding amount of monitoring doing on, and the reasons behind it are surprising as revealed in this film.

In some cases they aren’t too surprising, but I know I did feel kind of stupid for not even thinking about some things. And this is the point, it really wants its viewers to think before they act in the online world. Don’t blindly accept things, and take time to read into what you are actually taking part in. It is an important message and after seeing this it will change the way you think about your own online presence, it did for me very much so.

There is an interesting point in the film, where Mark Zuckerberg does not want to be filmed and then talks to the filmmakers when he thinks he isn’t being monitored. He is the founder of Facebook, an element that seems to want to invade privacy yet Zuckerberg like the rest of us values his own but seeming not anyone else’s. The point being made here is obvious and that in itself is something to think about. The film is a must see, and I do hope this brief review will convince you all to check it out.

Author’s Note: This review is a bit shorter than usual, this is due to on-going health issues that are making day to day life a real struggle. I would rather have a shorter review for the readers than none at all. Thanks for the support!