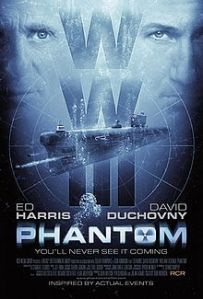 I’m back with another review of another submarine movie. I love my submarine movies. Why? Well for the simple reason that because they are usually set inside a submarine means that the movie has to be sold on its story and the performance of the actors. Special effects are only a tiny part of the movie so therefore unlike your typical Hollywood blockbuster that almost solely relies upon special effects to entertain the viewer, the director of the film needs to do the hard yards and get a great performance from his crew. This movie is infact inspired by true events. Phantom is the story about a Soviet ballistic missile submarine that went missing during the cold war between the United States and the former Soviet Union. It is set around the time of the Cuban missile crisis, which put the world on the brink of nuclear war. Phantom stars veteran actor Ed Harris (Captain Demi) along with David Duchovny (Bruni), Lance Henriksen and William Fichter (first officer or XO) as the actors that people would most recognise. People may also recognise Jordan Bridges (Sonar operator) and Kip Pardue who starred alongside Stallone in Driven.

The movie starts out with the captain and his crew being recalled early from shore leave to undertake a secret mission onboard the Soviet Navy’s last diesel powered sub and one of the first to be converted into a ballistic missile sub. The mission appears to be sanctioned by the KGB rather than normal political channels. When the crew are preparing the ship for sea we are introduced to Bruni who we presume is a KGB officer sent to undertake a secret mission and we are shown a cloaked piece of technology being fitted to the deck of the sub. As the sub gets underway we learn that the sub’s true mission is cloaked in secrecy from even the captain and the political officer on board the boat. Eventually we learn that the Phantom is a piece of technology that is able to alter the acoustic footprint of the Russian sub to make it appear as anything other than a submarine to American sonar which gives the Russians a significant tactical advantage. We learn that it is really the KGB who is pulling the strings on the boat, which does not rest well with the captain and inevitably leads to conflict. We soon discover that the plan is for the Sub to fire its nuclear ballistic missile at American by using the phantom drive to pretend the missile came from China. This would lead to all out war between the US and China leaving only Russia standing as the lone superpower in the world. What ensues is a mutiny onboard the submarine and a fight between the captain guided by his morals and Bruni who is following his misguided orders. 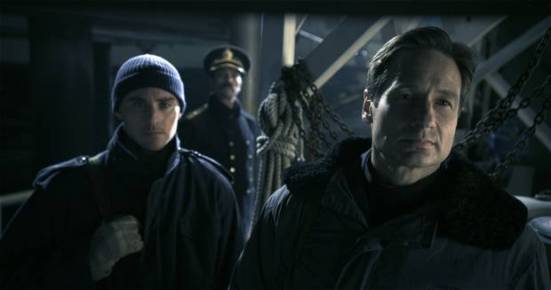 The film is not on the level of Crimson Tide or The Hunt for Red October and it is evident from the production quality. Having said that, the special effects are quite good and there are some really great cinematography moments. Ed Harris delivers another great performance, but I still can’t help that he somewhat phoned it in as well. Harris is a great actor, but I just don’t think he was really taken out of his comfort zone by the director. Duchovny was his usual bland self. I just saw Mulder from the X-files. He pretty much plays himself really, just with a slightly more menacing side to his personality. I think the stand out performance really goes to Fichter who plays the XO. No matter whether it is a Michael Bay film or something of this calibre he always gives 110% to his role.

The movie overall was enjoyable, but I really didn’t get that same sense of tension in the mutiny that I got when I watched Crimson Tide. In some respects they are almost the same movie, it’s just this one really didn’t sell it to me. I was hoping that crew would talk with Russian accents to help sell the performance much like the crew, with the exception of Sean Connery, did in The Hunt For Red October. Of course the Russian crew in that movie were in fact Russians who had immigrated to the US so the Russian accent was natural, but it would have been nice and would have helped sell the scene rather than hearing American accents from Russian sailors. If you like your submarine movies, then this one is at least worth a watch since it was inspired by true events.

Cons: Lack of Russian accents by the actors.