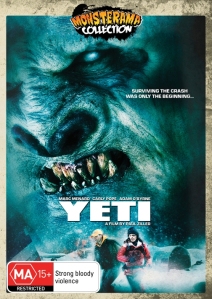 The Film:
Anyone who knows me knows it’s no secret that I watch terrible movies on a regular basis (hence my nickname the Terrible Australian, I watch the films that nobody else wants to). To me there are only two types of bad films: the ones that are so bad they are awesome (TROLL 2, NO RETREAT NO SURRENDER, THE ROOM) and the ones that are so bad that I would rather commit hara-kiri on myself before ever watching them again (BOLERO, WELCOME TO WOOP WOOP, TEXAS CHAINSAW MASSACRE: THE NEXT GENERATION). Bad films can be either one or the other but never in-between. However when I was sent the film YETI to review, I discovered that this is the first time I’ve encountered a film that just happened to be both. How is that you ask? Read on and find out!

The film tells the story of an American college football team whose plane crash lands in the Himalaya Mountains during a terrible storm. It becomes a fight for survival for the remaining survivors of the crash as they do all that it takes to keep themselves alive until a rescue team finds them. However they soon discover that there is more to be afraid of than just the cold, they start to be stalked by a mysterious man-eating creature that lives in the mountains: the Yeti.

First off I should state that YETI is a bad film. It’s a really, really, really bad film. It’s basically a rip-off of the 90’s film ALIVE but instead of having Ethan Hawke, we have a Yeti in it (seriously take out the Yeti aspect and they are basically the same film). Everything about this film is terrible. The acting by the cast, the script (which is from a story by the film’s executive producer Mark L. Lester. If his name sounds familiar, he was the guy who directed FIRESTARTER, SHOWDOWN IN LITTLE TOKYO and the classic Arnold Schwarzenegger action film COMMANDO), the direction by Paul Ziller, the gore, the CGI and even the Yeti itself (which looks like someone stole Jim Carrey’s costume from DR. SEUSS’ HOW THE GRINCH STOLE CHRISTMAS and spray painted it white) are just absolutely poor on every level. It even has the most un-scariest and most poorly done plane crash sequence I’ve ever seen in a film, seriously the plane crash in AIRPLANE! was terrifying than the one in this film (while the plane looks big on the outside, the cabin on the inside is pretty small). Even the plot itself doesn’t make any sense: seriously why the hell would an American college football team be flying over the Himalayas (which is clearly not the Himalayas by the way) in the first place?

The film gives a reason why that is (the team is on their way to Japan for a special exhibition game) but even then it still doesn’t make any sense (especially for a team from college). It doesn’t help the actors who play the football team look like that they are in their 30’s. Also another thing than is just bizarre is that the local rescue team (played by both Peter DeLuise, of 21 JUMP STREET fame and Ona Grauer) are white Americans despite the fact they are in Nepal (as you can tell there is no logic or sense in this film as all). Plus film is chock-full of plot-holes (the survivors can stay pretty warm despite wearing very little winter clothing).

Although I must admit that despite this film not making sense at all, I was entertained by both that and it’s awfulness for most part. However at the same time I was also bored by it for most part as well. That’s what I meant earlier when I said that this film is a weird mixture of being both a so-bad-it’s-fun film and so-bad-it’s-just-bad film. At the times it can be quite fun and at other times it can be really dull. I guess the reason for that is that film never really finds the right tone for what it wants to be: a cheesy fun tongue-in-cheek horror film or a serious horror film about survival.

Anytime the Yeti is onscreen, it becomes both fun and unintentionally hilarious (there are some really funny moments like where a character tries to fight the Yeti back by throwing a snowball at it and another where a character points and threatens someone with a flare gun, despite it not being loaded cause he *MINOR SPOILERS* shot someone else with it five seconds before *END OF SPOILERS*). Also for some bizarre reason the Yeti can run and jump long distances like he were Superman, the CGI they used for these moments are hysterically bad. However when the creature isn’t onscreen and film decides to focus on the character’s struggle to survive from the cold and hunger, it is incredibly boring, clichéd and unrealistic (they seem to want to want to resort to cannibalism pretty quickly). The cast try their best but sadly they are unable to make the situation they are in compelling due the film’s really terrible script. Plus for a film about a killer Yeti, the creature is barely in it. Seriously *MINOR SPOILERS* he doesn’t start attacking the remaining survivors until about nearly an hour into the film *END OF SPOILERS*. However when it does, the film starts to be pretty awesome. Although, I could have done with the prologue and epilogue scenes, they didn’t add anything to it at all.

Overall while YETI is a pretty terrible film but there are some aspects that I did find quite fun and if you enjoy fun bad films than I say it is worth a look (although, you have to deal with the rather boring stuff as well). If you are one those people who thought that ALIVE needed more Yeti’s in it, than this might be the film for you!

The Australian DVD:
The DVD I reviewed was a screener, so I am unable to comment on Picture/Audio quality.

Thanks to Bill, care of Eagle Entertainment for the copy.