I do enjoy Baz Luhrmann’s offerings, he is a filmmaker who certainly defies convention and he definitely has his own style. It was not surprising to me when it was announced he would be adapting The Great Gatsby, the famous 1925 novel by F. Scott Fitzgerald. From what I understood about the piece, it felt like it would be of interest to Luhrmann, whose films all have numerous themes and focus on love. As someone who has not read the novel (it just has not come my way), I can only judge the film for what it is, and what I saw and experienced.

The Great Gatsby along with Luhrmann’s other films (except Australia as I have not seen it yet) really draw me in straight away, and do not want to let me go. With such a strong hold, I found myself heavily paying attention to the film, in all sorts of ways. There is a lot hidden in the film, and I do love the layers that Luhrmann sneaks in. The story here starts with Nick Carraway (Toby Maguire) who is it seems a broken man. He is telling his story to a Doctor, a story about a man named Gatsby (Leonardo DiCaprio). Nick narrates to us what happens when Gatsby enters his life, and how this mysterious man with endless wealth eyes for his love Daisy (Carey Mulligan), who happens to be Nick’s cousin. Gatsby throws lavish parties in the hopes of one day getting Daisy’s attention, she is out of reach as she is married to the old money wealthy Tom Buchanan (Joel Edgerton).

Our story here is a little complex, there is a lot going on. Part of the fun is actually seeing it all unwind, and giving us a narrator and someone we are with the whole time Nick. We are seeing this all unfold as he does, we know as much as he does, and this world he gets thrusts into is just as mysterious to us as it is to him. He is a simple man, one without wealth, but he sees the life of the rich with Daisy and Tom and he witnesses first hand the lives they live. Tom goes out and spends time with his mistress Myrtle (Isla Fisher), the act that is known about but not spoken about so much in his household. Daisy is accustomed to her rich lifestyle, that is where she comes from. Gatsby himself views money and a lavish lifestyle as something he feels he needs to give to Daisy, and it is all for her. Nick is affected by it, by the people, he is a stand up person and he is presented to us as a man perhaps longing for that lifestyle but also knowing it isn’t the key to happiness.

Themes are a big part of Gatsby, the different classes of people are shown, the rich and the poor, the black and the white. The wealthy are unhappy, we can clearly see this as Tom strays away from his house to be with Myrtle. Gatsby has all his wealth and pines for one person, and it too isn’t making him happy. Our poor Nick seems quite content, and perhaps once he is thrown into the wealthy life he can see its flaws. Luhrmann also plays with the concept of race and wealth, and in a scene we see a white chauffeur driving around a group of African Americans, he is showing us that money seemingly can buy all. The grand parties are excessive and they need to be, they are shown to us in that distinct style we’ve come to expect from Luhrmann and while it is a feast on the eyes it does say something. It is decadence and excess, shown to the extreme. People want to indulge and be seen, this is what it represents. 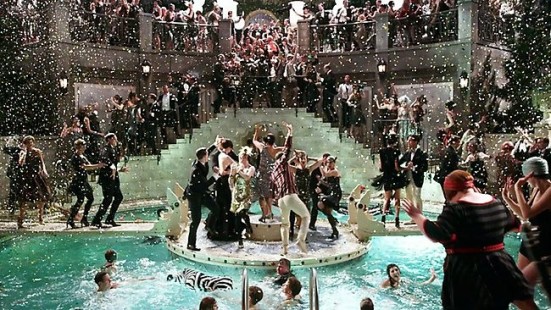 Gatsby himself doesn’t seem to be able to picture a future without Daisy or a future that is with Daisy that is going to be different than what they had. He doesn’t expect her change after their absence and it is shocking to him. What he wants from her is rather grand, and we are left to wonder whether she has the guts to go down that road. The best intentions may not always work out, Gatsby has them towards Nick. These themes and issues comes across very well in the film, I could really feel them. It is interesting that the love story here is both a beautiful thing and an ugly one, and I think with their differences that is the point. I could feel that things weren’t all sunshine for Gatsby and Daisy, and Luhrmann knows this to be true. This is really represented well with the use of the weather, the rain storms as Gatsby awaits to see Daisy and is nervous with their encounter, as they reconnect the weather changes and the sun shines. Not something that is subtle by any means, but it is a really nice touch throughout the film. It represents change and the underlying mood our characters are in.

Perhaps one of the most talked about elements of this film is the use of modern music, we know that Luhrmann likes to add the modern in. He gave us a contemporary Romeo And Juliet, and modern music in 1899 Paris with Moulin Rouge. This is an element that can challenge viewers, but Luhrmann is not giving you a realistic history story. He uses the modern music to help tell the story, he wants it to be seen as modern as well as historic. The themes are universal, and not limited to their time frame. I really enjoyed the music used for this film, I think it really fit the scenes and in particular the party and decadence scenes. I felt those scenes were really strong with the music, as well as the visuals, they do tell a story. While his style might seem crazy, it doesn’t bother me at all, it keeps up a strong pace during those scenes. Luhrmann wants to give us beauty, and he does. Its quiet when it needs to be and crazy and loud when it needs to be.

There is no doubt this is going to be one of the most visually stunning films of 2013, the attention to detail is fantastic. The costumes are stunning, they really bring out the feel of the 20’s and the architecture is rich and full of life. What the visual element has to say really gets said, look closely and you’ll see. Every piece of a costume or grease on a person has a reason to be there, it means something if you allow yourself to take it in. That is how Luhrmann works, he sees beyond words, and as much as there is conveyed with dialogue he gives us as much to uncover with our eyes. The script is a very solid one that he co-wrote with Craig Pearce, paced and thought out well.

This film is filled with very talented actors, each one bringing something unique and memorable to their character. Perhaps the performance that surprised me the most was Tobey Maguire as Nick, I had no idea he would be front and center. We have an actor here that has done a lot of films, ranging from all sorts to The Cider House Rules and Spider-man. I don’t mind him, and I felt he really stretched himself here and it might be one of his top roles. He jumped into the role and made it his own, he became Nick and Tobey Maguire the actor really disappeared. Carey Mulligan is easily one of my favourite young actresses, she is a stunning woman and she oozes talent. What a great fit she was for Daisy, her beauty and innocence shone through and the emotions Daisy felt hit me. Much like Maguire I really felt she put a lot into her performance and in turn I saw Daisy not Carey. Joel Edgerton made for a really brute Tom and he was fantastic. He really is a chameleon, able to play all sorts of roles and in the villainous role he was convincing. Elizabeth Debicki as Jordan was truly beautiful and very cool, her chemistry was strong with Maguire. Their scenes together work well and are memorable, she’s great. In smaller roles Isla Fisher as Myrtle and Jason Clarke as George were really solid, I always enjoy seeing them on the screen and they delivered here. Leonardo DiCaprio was born to play Gatsby, he really was. The role fits him like a snug glove, and after this I can’t imagine anyone else in the role. He brought so much to the table, the mystery, the kindness, the extravagance, the crazy, you name it! As a huge fan of DiCaprio’s I am always thrilled to see him in a film, his roles are always different and he certainly challenges himself as an actor. Gatsby is no easy task to pull off, but he does it and it’s fantastic. The chemistry he shares with both Maguire and Mulligan is magical. While on paper their romance doesn’t seem strong (with the script) but brought together they make it believable and it comes off as strong.

I really enjoyed this film, I felt Baz Luhrmann delivered a very interesting film that was full of things to say and things to uncover. His style is certainly not to all tastes, but for me it works and it works well. This writer is now very curious to pick up the novel, and it is a lovely thing when a film can do that. I felt the The Great Gatsby shines on every level, and while perhaps it is a tad long and the ending is a little odd, the enjoyment wasn’t ruined at all by these things. While it has its flaws, as all films do, I think it all comes together nicely. For me this was an unexpected delight and I really am looking forward to seeing it again.