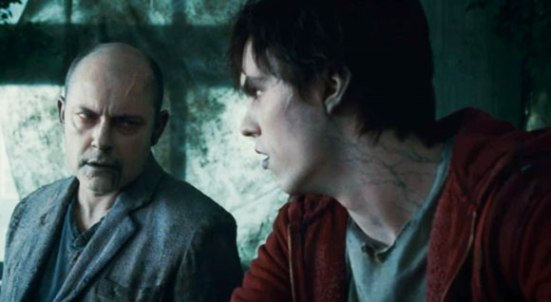 The day has finally arrived! Warm Bodies has a trailer, well technically it has two trailers and I couldn’t be happier.

I have waited and waited, and the reward it seems is two trailers – and they definitely exceeded my expectations.

It has a kind of Shaun Of The Dead/Zombieland humor vibe to it – which I really liked and it certainly looks to be setting itself apart from other zombie films.

The film stars Nicholas Hoult, Teresa Palmer, Rob Corddry, Dave Franco, Analeigh Tipton and John Malkovich, it was written and directed by Jonathan Levine – based on the novel by Isaac Marion. It will be released in the US on February 1st 2013.

Watch the trailers after the synopsis …

Synopsis: Zombies love people, especially their brains. But R (Nicholas Hoult) is different. He’s alive inside, unlike the hundreds of other grunting, drooling undead—all victims of a recent plague that drove the remaining survivors into a heavily guarded city. Now the Zombies roam about an airport terminal, searching for human prey and living in fear of the vicious Boneys, the next undead incarnation.

One day, R and his best friend M lumber toward the city in search of food. There, R first sets his eyes on JULIE (Teresa Palmer), a beautiful human. Determined to save her—first from the other Zombies and then from the Boneys—R hides her in his home, a cluttered 747 aircraft. Julie is terrified, and R’s grunted assurances of “Not…eat” do little to calm her. But when R begins to act more human than Zombie, coming to her defense, refusing to eat human flesh, and even speaking in full sentences, Julie realizes that R is special.

After a few close calls with the Boneys, and with her father mounting an armed search for her, Julie realizes she can’t hide forever. So she sneaks back home, leaving R broken-hearted. Desperate to see her, R decides to comb his hair, stand a little straighter, and impersonate a human long enough to get past the city guards. If only he can prove to the humans that Zombies can change, maybe R and Julie’s love might stand a chance. But with the rampaging Boneys heading toward the city and Julie’s father intent on killing R and his Zombie friends, the stage is set for an all-out battle between the living and the undead.

A genre-bending tale of love and transformation, WARM BODIES is a story about a boy who loves a girl…for more than just her body.