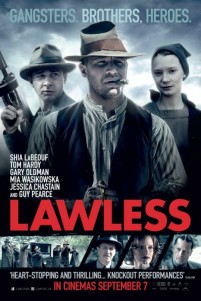 It always makes me proud when one of my fellow Australians does very well in Hollywood, whether they be in front of or behind the camera. It just shows just how much film studios recognize great talent when they see it. One person in particular is director John Hillcoat, who has definitely come a long way since he’s been making films in Australia (which include his fantastic Aussie western THE PROPOSITION). He made his Hollywood film debut in 2009 with the acclaimed film adaptation of Cormac McCarthy’s novel THE ROAD and now he is back with his follow-up film, which perhaps may be his biggest film yet: LAWLESS. So what is the film about?

Based on the novel THE WETTEST COUNTY IN THE WORLD by Matt Boundurant and set during the time of the Prohibition-era of the 1930’s, the film tells the story of Bondurant brothers – Forrest (Tom Hardy), Howard (Jason Clarke) and Jack (Shia LaBeouf) -, who run a successfully bootlegging business of moonshine in their town of Franklin County. Everything goes fine for them until one day they meet a crooked corrupt cop from Chicago named Charlie Rakes (Guy  Pearce), who has come to Franklin County to get a share from all the bootleggers in the area. Rakes tells the Bondurants that if they give him half of their profit, he will leave them alone. But they refuse his offer and eldest brother Forrest tells Rakes that if he ever comes back, he’ll kill him. However it proves to be a big mistake as Rakes decides to declare war on the Bondurant brothers.

I have admit I was expecting a lot of great things from LAWLESS, not only because of director John Hillcoat but for the both the amazing cast and crew that he assembled for this film, some of which happen also to be also Aussies (including re-teaming with his THE PROPOSITION screenwriter/composer Nick Cave, who wrote the script and as well as co-wrote the score for this film too). Plus I also enjoy period gangster films so this was right up my alley. Unfortunately I found the overall film itself didn’t quite live up to my expectations. However despite that, it was still a really good and well made film that I was completely engaged by from beginning to end. Hillcoat brings a lot of skill and intelligence to his direction of the film, he gets both the look and feel of the period down perfectly and also he never did shy away from the film’s most violent moments. Believe it or not, I actually taken aback by some of these scenes, especially one in particular I found quite shocking because I didn’t expect it all (if you have seen the film, you’ll know which one I’m talking about). Another thing that really surprised me most about this film is that how humourous it can be at times (which is good as it eases a bit of the film’s drama and tension). Plus it helps that Hillcoat has a great cast on the display here.

Shia LaBeouf did a solid job in the lead role as “Jack”, he was the film’s emotional centre and I like his character’s arc during the course of the film. Tom Hardy brings his trademark charisma and intensity as “Forrest”, it’s another terrific performance from him (although, he did tend to mumble on occasional). Guy Pearce makes for a really menacing, slimy and sociopathic villain as “Rakes”. While he does come off a bit cartoonish in the beginning, but he eases into the role as the film goes along. He’s character is definitely the type of villain that you hate to hate and he steals every scene he is in. While both Jessica Chastain and Mia Wasikowska’s characters are underdeveloped but they both make the most of their roles, particularly Chastain who was terrific as always as “Maggie” (plus she is absolutely gorgeous and sexy in this film. She would have been right at home in a 30’s film).  Also Jason Clarke as “Howard”and Dane DeHaan (who was the lead in CHRONICLE) as “Cricket Pate” both deliver in their supporting roles. Nick Cave’s script is well written and the score that he co-wrote with Warren Ellis was top-notch. They also wrote and performed (along with a couple of friends) all the songs that played during the film. The cinematography is beautifully done by Benoit Delhomme (I love the rusted, muted look that he gives to the film), The production/costume designs were nicely done and captures the look of the era extremely well.

However on the negative side as I said before while I still a solid and well made film, I felt that it could have been a much better. The film had a lot of potential to be a truly excellent film rather be simply just being a pretty good one. I would have loved the film had explored more of that period since it was a really interesting time during the Prohibition-era, while it did touch on some aspects but I would have liked to have seen more of it. Also there were curtain subplots that I wished that either did more with or just cut them out completely since they didn’t really add much to the film (while Gary Oldman was solid as always in the film, he was extremely underused and his role was basically glorified cameo. It didn’t help that the film doesn’t really go anywhere with his subplot). Plus the romantic subplots between Jack/Bertha and Forrest/Maggie also didn’t add that much as well and the film was quite predictable, it was pretty easy to figure out where the story was going to go.

While it is flawed and could have been a much better film, it was still found LAWLESS to be quite a compelling, enjoyable and well made film overall. If you enjoy a good old-fashioned gangster/crime film, then I would say that this one is definitely worth a watch for sure.