After what seems like years, I finally sat down and watched Drácula (1931), the Spanish version. It was shot at the same time as the Tod Browning film, using the same sets and script just at night with a different cast. The crew had the chance to watch dallies of the Browning version, and what we get is a rather different film. I’d hate to compare the two because they are rather different, both with different positive aspects and negatives. But overall I felt they were on par with each other, and they are both fantastic films.

The story here will not be surprising, Mr. Reinfield (Pablo Álvarez Rubio) goes to pay a visit to Conde Dracula (Carlos Villarías) in Transylvania. He is there for Dracula to sign papers to take over an abbey in London. They travel there and Dracula has turned Reinfield into a mad man under his control and he plans to feed off the women. However Professor Van Helsing (Eduardo Arozamena) figures out what Dracula is, and hatches a plan to stop him.

Nothing much changes with that, this version is much longer than its US counter part, adding in scenes with an ending that feels quite different. There are changes, some work and others don’t. The fact that this is longer, for me personally hurt the film a little, as there were scenes that really didn’t need to be there. What makes this a satisfying film and an intriguing one is that it is extremely provocative. There were no rules in place for the sexuality on display here, and it is very much on the surface. They had more freedom of expression, and it certainly shows!

It is a beautifully shot film, with wonderful performances. Especially Lupita Tovar as Eva Seward, she was amazing. While I do think Bela Lugosi made the better Dracula, Carlos Villarías did a pretty solid job and despite the sometimes-funny yet great facial expressions he managed to be menacing. Pablo Álvarez Rubio was every bit the match to Browning’s Reinfeld Dwight Frye, maniacal and quite amazing to watch. If you are a fan of the US film, you must see this one, it is one heck of an experience. 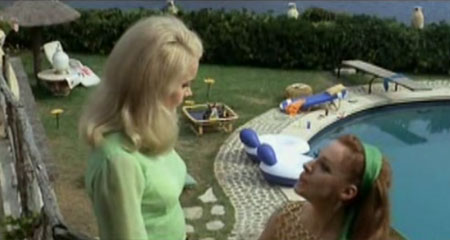 Sad as it may be, I am only really familiar with Umberto Lenzi’s cannibal-esque films. Cannibal Ferox aka Woman from Deep River aka Make Them Die Slowly was the first film of his I ever saw, and after that I caught a few others but pretty much left his giallo work alone. It wasn’t until recently that I wanted to see some of his other works, so I decided I’d start with Paranoia aka A Quiet Place To Kill not to be confused with his other film called Paranoia aka Orgasmo. Why did I choose this one? The title I found intriguing, and it had killer artwork, I mean how else do you pick a giallo?

Paranoia is a complex story, one that caught me off guard with its twists and turns. It begins with a racecar driver Helen (the stunning Carroll Baker), who has an accident and her professional/personal life take a huge dive. She gets invited by her ex-husband Maurice (Jean Sorel) to stay at his estate with him and his new wife. She accepts, but finds out it wasn’t Maurice who invited her but his current wife Constance (Anna Proclemer). Why is she there? Well Constance wants her help in killing Maurice!

There is far more to the story of course, it wouldn’t be a giallo without twists and turns along the way. The murder plot runs deep, and if you are a decent detective you’ll be able to work things out before they are revealed. This is a decent film and effort, although I think a little too much was cramped in. The characters are not at all likeable, and the story itself is what solely keeps us invested. It is hard to engage with these characters; instead we are left to engage in their bad behaviour, which isn’t as interesting as I had wanted it at first, it does pick up though.

Performances here are solid, and it is a nicely shot film. Umberto Lenzi has made a fair film, something for giallo fans to seek out, and get a sense of his style. Not his best work, nor do I think it is close to his worst either.