Every so often a film comes out of the angel-sub genre variety, and they certainly range in subject matter. I prefer films such as Dogma, and try and avoid the City Of Angels type (although the original Wings Of Desire is actually good). I wasn’t really sure in what direction My Boyfriend Is An Angel would take, but seeing the words Romantic/Comedy gave me a slight indication and I was hoping this wouldn’t be the City Of Angels type. After sitting down and watching the film, I can safely say that it isn’t of that sort, and it is an enjoyable film for the most part.

Our film is about a young woman Sasha, who is a student and on this day she has a big exam ahead of her and then plans to head to a New Years Eve party. Things don’t go as planned, as she finds out her boyfriend is cheating on her, and that her father and his friends are coming to stay for a few hours between flights. Things get worse when she accidentally falls out of her window trying to save her cat, but instead of falling to her death, she falls on top of Seraphim an angel. Sasha doesn’t believe him of course, but she notices that he is rather naïve on most things but then contains a vast knowledge of other things, and he has Superman type strength. The day is a rollercoaster ride, which reveals why he is there and it explores whether an angel and a human can actually share love.

What this film gets right is its casting, our two leads are great and share a really natural chemistry together. Seraphim was perfectly handled, he’s this crazy sort of character and he is the ‘fish out of water’. Sasha reacts very confused towards him, and sometimes I wasn’t sure her motives seem right but the performance was very good. The side characters and actors were rather enjoyable, and if anything they all made for an entertaining experience. This is also a very lovely film to look at; it is so vibrant with its colours and expertly shot. The opening scene is fantastic, with this element of wonder about it. There are some really magical scenes, ones that come together perfectly and are a delight to watch. 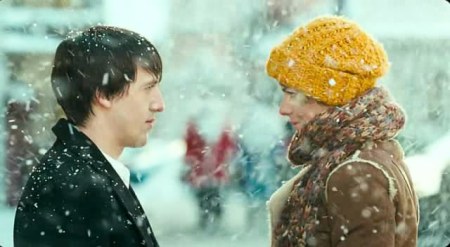 On the down side, this film is far too cute for its own good. I didn’t feel there was enough conflict and there were so many things it could have explored but didn’t. It played it a little too safe, it at least however didn’t head into clichéd territory towards the end and I did appreciate that. An angel coming to Earth has so many possibilities and this film had potential to go places that other films haven’t, it was disappointing to see that it didn’t and sadly this doesn’t stand out amongst the others of the sort. It contains a lot of seemingly random scenes, but all of these do come together and I did like that part.

This isn’t a great film, but it is a good one. It was nicely directed and Vera Storozheva really brought something to the table here. There is something here for everyone, and if you are looking for an extremely quirky rom/com with a rather handsome angel and a very cute leading lady then this will suit. It is a really interesting example of Russian filmmaking, and how it does differ from Hollywood. If there were to be remake, it would be a very different film with a clichéd ending.