Without question, The Avengers is one of the best comic book film adaptations and the best Marvel film thus far. We saw the build up films with Iron Man, The Incredible Hulk, Thor and Captain America. We knew what the inevitable was, and the burning question was ‘Will an Avengers film be able to fulfill how fantastic the predecessors were?’ I admit that I had my reservations about the film, how can a film with so many characters work? Well not only did it work but it far surpassed my expectations. Joss Whedon really was the right man for the job, and he delivered an action packed and comedic film that will please all sorts of fans and new comers.

The film begins right off the bat with introducing us to the villian, Loki (Tom Hiddelston) with whom we met in Thor. He has evil plans, and he’s going to deliver on them as we see what his goal is, to take the tesseract. The tesseract is an artifact stolen from Odin’s treasure room, which was in the possession of Red Skull (as seen in Captain America), Loki wants to harness the power and take over the Earth. This is where The Avengers come in, the group must band together to save the world. But all is not as simple as that, how do you get all these great heroes together and how can they over come something so powerful?

The film is exciting, fresh, funny and basically everything you want out of a superhero/comic book film. It isn’t really run of the mill stuff, and it manages to stay true to everything that had been established with the previous films and expand on that and have this central team of characters and accomplish something. Looking back at the casting of the previous films, everyone was so right for their roles, but they were also right as a whole. The only exception being Edward Norton as Bruce Banner/The Hulk who was recast with Mark Ruffalo. I honestly couldn’t see him working with this ensemble, and as much as I was a fan of what he did with the role, the recast was a strong move. Mark Ruffalo may actually be the best Bruce Banner/The Hulk that I have personally seen. He manages to embody everything and his chemistry with the rest of the cast was spot on. I couldn’t have asked for anything better with this, so if you had any reservations about that aspect, forget it.

The film has so many strong points, and looking at it as a whole I honestly couldn’t find any real faults aside from something very minor which really didn’t affect my viewing experience. As mentioned earlier, let’s just dive into the characters. Everyone is basically back, our main heroes Iron Man, Thor, Captain America, The Hulk, The Black Widow and Hawkeye (as seen in a cameo in Thor), we also have Agent Couslon and Nick Fury. The heroes aren’t a team as we begin the film but you can bet they are by the end. They all have huge personalities, are very different from one another, have their own views and opinions and generally operate quite differently. Each has a different role to play, which gets realised as the film progresses. The characters are exactly what we got in the previous films but this time around they have to work together against a force so powerful even the team seems small in comparison. Everyone fits the roles well and by now the actors have a pretty good understanding of them. Whedon certainly knew that because there were quite a few different characters, that he had to make it work. There is no main focus on a single character, everyone gets even time and there is actual development. I was really surprised and impressed with this, as this was my big fear coming in to the film, but it was handled so well. As I mentioned before the chemistry was there between all the characters, the banter was natural and the tensions and bonds were perfect as well. 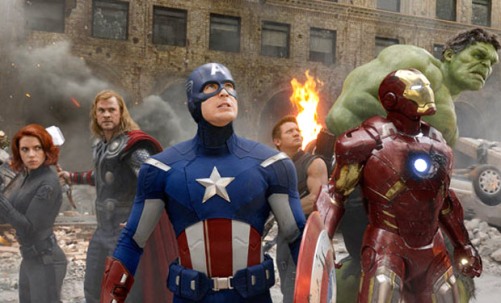 I thought everyone was fantastic, they were all on their A games and it was just a joy to watch. No beats were skipped at all by anyone, and even the newcomers Mark Ruffalo and Jeremy Renner were right at home and rocking it hard. Robert Downey Jr is quite simply the perfect Iron Man and he makes it work on any environment. His interactions with the others were probably the more humourous and entertaining, especially with the likes of Thor or Captain America. Chris Hemsworth makes such a great Thor and while he is the fish out of water with the group, he really makes a bond with the others and certainly doesn’t feel out of place. Chris Evans was fantastic, like Thor he is now also a fish out of water, having missed a lot since WW2 till now. It really comes across well that he is trying to adjust to our time, and is still the same man he was and his good and strong intensions are never compromised. Scarlett Johansson was really great, her character is expanded here and she certain proves that she isn’t useless. While by comparison with the others on paper she may seem that way, Whedon found a way to make her a strong part of the team, and Johansson really made it believable. Jeremy Renner seems like such a great fit with Hawkeye, I wasn’t sure what to expect with him and what I got was quite unexpected and I really liked it. He makes his mark, while the character itself isn’t as larger than life as some he’s enjoyable and I’d watch a stand alone film of his.

I already briefly mentioned Mark Ruffalo’s performance, this guy was meant for the role of Bruce Banner/The Hulk. He brought something very fresh to the role and he played it so right that I almost wish he had him earlier even though I liked Edward Norton’s take on it. He worked well with the other cast members and was such a great addition. Samuel L. Jackson is a cool cat and he’s a great Nick Fury, I enjoyed him in this and it was nice to see his role expanded. We all love Clark Gregg and Agent Couslon and he brings it once again, absolutely loved him in it and his interactions with the team. Cobie Smulders had more of a background role as Agent Maria Hill, but she was pretty good and I hope we see her in a future film. Stellan Skarsgard is back as Selvig and he’s really good, its actually quite a good role for him to play. Tom Hiddelston rocked it as Loki, one of my favourite and fantastically written villains, this film takes it up a notch and he really expanded upon what was created and made Loki this powerful and calculating being with that side dish of ‘little sh*t’ that was saw a bit of in Thor. There are times we nearly steals the show, however that really went to The Hulk and their interaction actually made all of us in the audience cheer.

The action in the film was great, it was grand and it played at the right moments. Some of it was a little hard to see and had some quick edits, and that was really the only minor problem that I had. The action is mixed in with the drama and of course the comedy, this film actually works pretty well as a comedy. Whedon as a natural ability for comedy and that was here in bucket loads, the thing is though it never feels out of place. The other films had that comedy element, so it isn’t something that feels out of place at all, it worked, it worked well.

At the end of the day, The Avengers is a great film, it got everything right. It really is everything you want it to be and then some. It takes things to the next level, it plays it smart and there is never a dull moment. Whedon crafted pretty much the perfect superhero film, on all levels he really went above and beyond. Even if you aren’t too familiar with The Avengers, this has an extremely wide appeal. SEE IT!