With the advancement of interactive video entertainment (read: games) in the past two decades we’ve seen the line between consoles button mashers and silver screen classics begin to blur. Extensive narrative, realistic graphics and player controlled cameras could see previously uninterested movie buffs pick up a control pad and get involved. Here’s ten places to get started…

Nothing makes a good espionage flick like a twisting, turning plot and plenty of over-the-top characters. If ‘Metal Gear Solid’ didn’t take itself so bloody seriously it could pass as a satire of the genre. If you want your spy games with a healthy dose of bananas, this is your fix.

Play it if you love: ‘Mission: Impossible’

Does the name Ray Harryhausen mean something to you? Then this game series is worth your time. Taking on the persona of a fallen Greek god on his way to bloody revenge against the rest of his comrades you bring bloody mayhem to a wide variety of Greek mythologies greatest hits. The monsters, battles and dazzling locales are straight of a classic mythical monster mash.

Play it if you love: ‘Clash of the Titans’

Comic book heroes have become a staple in cinemas ever since Singer brought the X-Men to life. Now the conventions of a superhero origin story are familiar to movie-goers, it only makes sense that they’ll be an interactive counterpart not far away. ‘inFamous’ puts players through their paces as a newly electrified scowly man with the options of saving or enslaving the city. The focus on the characters emotional arc is reminiscent of some of the better big screen outings of the spandex crowd.

Play it if you love: ‘Batman Begins’

‘Half Life 2’ doesn’t take its cues from any film or genre in particular, yet it’s in game story-telling and strong characters give gamers an experience more akin to a great movie than a traditional game. Variations in environments run you through sci-fi action and zombie infested horror cemeteries, giving people plenty to enjoy.

Play it if you love: ‘The Matrix’ – just for the office nerd turned hero.

The current perception of ‘cowboys’ and the old west was created on the silver screen. When most people envisage this era they’d be picturing characters portrayed by Clint Eastwood and John Wayne. It stands to reason that fans of Westerns will find plenty to love about this interactive epic. The modern representations of the grittier, morally ambiguous hero comes alive right here.

This particular game deviates from the rest of the rest in that it doesn’t put the player in a movie scenario, but instead puts them in charge of studio. Managing the money and celebrities right down to writing and directing your own opus, this gives you the full spectrum of the studio experience.

Finally all the bitching about the ‘Hollywood system’ can be vetted by opening and running your own production company – and then cringing when you realise just how quickly you succumb to the public demand for cheesy blockbusters.

Play it if you love: ‘The Player’

The current era of action movies have a simple formula – terrorists, the Middle East, U.S. landmarks and back-stabb’n. The CoD series delivers this while giving players the flash bang level spectacle of the best Michael Bay flick – but with more substance. There’s been many re-iterations of this concept in gaming, but the original Modern Warfare did it best.

Play it if you love: ‘Black Hawk Down’ 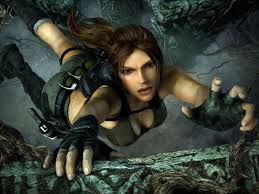 Indiana Jones was a throwback to adventure films of the old days, and Lara Croft picked it up from there. Taking all the stables of the genre and flipping the protagonist’s gender proved that the future of adventure was on the console.

Play it if you love: ‘Raiders of the Lost Arc’

Here’s a game that quite deliberately apes the cinematic medium, playing out like a choose-your-own adventure and incorporating a new level of realistic graphics. Although limited in freedom and replay value, it’s a unique experience as you control the victim, killer, cop and love interest in turn.

The creators behind this recent smash hit aren’t shy about their influences – many cases tackled are based on fictional crime stories, and collectable items include film reels containing classic noir titles. The level of realism and interaction with the motion captured actors drops the player into their very own crime thriller.

Play it if you love: ‘L.A. Confidential’