Greetings and saluations! Marcey aka Super Marcey here, this is my website! You’ll find a range of reviews (new releases, classics, horror, TV and much more), features, lists and of course The Super Podcast, The King Zone Podcast, Podcasters Of Horror and The Ozploit Cast.

I have been writing about films since I was 16 and I founded this website in February of 2009. The site was previously at Blogger and it had been there for several years before I decided to move it to its own domain through WordPress.

Bede might be the biggest Bad Movie fan of all time, hence his proud nickname The Terrible Australian. He has been writing about films for several years, co-hosts the podcasts on the site and hosts his own Bad Movie Tweet-a-thon. You can also check out his column Horror Down Under at The ScreamCast. 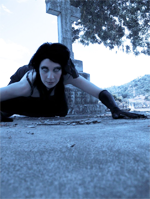 “Who’s this skirt?” I hear you ask. Well, my name is Beatrix Harper (no relation to Beatrix Kiddo, sorry) and Her Royal Marceyness has kindly adopted me into her fold of fun, mischief and all things cinema. I am not a professional reviewer by any stretch of the imagination, but I love my cinema and I love the people who share my passion, people like you.

I also main-line Witchblade comics, bingeing on PS3, reading, and sticking folks with sharp implements to help them get better.

Favourite Director: Guillermo del Toro (if I could marry his brilliant mind I would in a heartbeat)
Favourite Film: Hah! Good luck getting an answer there.
Favourite Actor: Changes like the seasons.
Favourite Actress: As above.

All written content is copyright to Marcella Papandrea and contributors (all reviews, columns and opinions).

4 thoughts on “About Us”