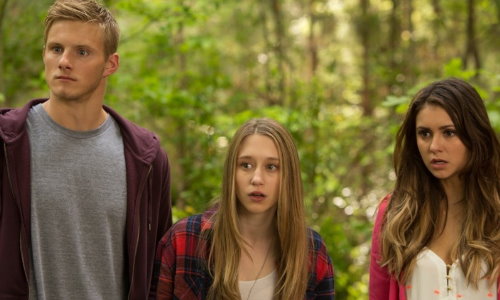 Who doesn’t enjoy a good 80’s slasher film? There are many out there and quite a few that involve or take place at a Summer Camp, perhaps the most well known is the Friday The 13th franchise. The killer chases the teens at the camp and kills them one by one, and it is usually the virgin of the bunch who ends up defeating the killer, aka the final girl. This brings us to The Final Girls (2015), a film that is part satire, part meta and all comedy gold, takes a stab at the 80’s slasher genre with glorious results.

Max (Taissa Farmiga) is a young woman who is mourning the loss of her mother Amanda (Malin Ackerman), an 80’s Scream Queen who was looking to be taken seriously as an actress before her passing. The film she is most known for is ‘Camp Bloodbath’, a Friday The 13th style film. Max’s friend Duncan (Thomas Middleditch) plans a screening of the infamous film and wants Max to come and be a part of it. Hesitantly Max agrees and her friends Gertie (Alia Shawkat), Vicki (Nina Dobrev) and Chris Alexander Ludwig) come along. During the screening a fire accidentally breaks out, and in an attempt to escape they go through the broken screen, but some how it pulls them into ‘Camp Bloodbath’. Max is torn between seeing her mother again (as film character Nancy) and trying to find a way to escape their situation, will she ultimately make the right decisions?

A great aspect of this film is how it handles the satire with it’s take on 80’s slashers, it points out the ridiculousness of them but also the fun an audience has with them. Having most of the film take place inside another (fictional) film is a great time, as the characters have to interact with the film characters and find a way to make their situation work. The humour is fantastic and it mostly hits all the right notes, with the actors sharing great chemistry together. The film is PG-13 so there is limited blood, but this doesn’t hinder the film, as at it’s core it is a film with a lot of heart.

Taissa Farmiga is a great lead and well cast as Max, she shared a really strong chemistry with Malin Ackerman who also shines in her dual role. They make the mother/daughter aspect work and they are the real hearts of the film. Alia Shawkat is wonderful as best friend Gertie, she has some good moments to show her strong skills with comedy. Nina Dobrev has been been moving away from her role on Vampire Diaries and showing her range, she’s very good as Vicki and makes good work of the role. Alexander Ludwig is fine, perhaps his character didn’t have enough to do but he wasn’t a stand out. Thomas Middleditch did stand out however as goofy and awkward Duncan, he’s always good fun. Adam Devine, Angela Trimbur, Chloe Bridges and Tory N. Thompson were great as the in film cast for ‘Camp Bloodbath’, nailing their 80’s slasher roles.

While The Final Girls (2015) is less horror and more comedy, it works immensely well. It is a great film for those who love their 80’s slasher films and there is no doubt you’ll have a lot fun along the way. This film is like the cousin to The Last Action Hero (1993), tackling a different genre and never taking itself too seriously. The Final Girls is the perfect film to watch with a group of friends, highly recommended.

The story of ‘Little Red Riding Hood’ is a much loved classic, whose origins date back to around the 10th century. The best known versions are from Charles Perrault and the Brothers Grimm, and while those are a source of inspiration for The Company Of Wolves (1984), it is Angela Carter’s short story that this film is mostly based upon. The film is more of a feminist retelling of the classic tale, including themes of sexual awakening and becoming a woman. It is a very intriguing take and the themes fit perfectly into the story, The Company Of Wolves is unlike any other ‘werewolf’ film and stands out as a unique take on the lore.

The film begins with young girl Rosaleen (Sarah Patterson) asleep in her bed, where her dreams take her the middle ages and she lives in a small village with her parents (David Warner and Tusse Silberg). The small village has seen a rise in wolf attacks, including her sister Alice (Georgia Slowe) who was killed by them. Rosaleen is fascinated by the wolves and her Grandmother (Angela Lansbury) tells her stories about them, but also telling her to beware of men ‘whose brows meet’, insinuating the wolves are actually werewolves. Rosaleen fights off the advances of  boy (Shane Johnstone) in town, but instead finds her Grandmother’s stories more interesting. As more wolves seem to show up near the village, it appears as though they really aren’t what they seem.

The Company Of Wolves is a terrific film to watch, the sets and costumes are beautiful and add to a dream-like quality to show that this is part of Rosaleen’s dreams. The stories told through the film offer some interesting insight as well, showcasing some very good make-up effects and unique transformation scenes. These are wolves hiding in human skin, wolves on the hunt and Rosaleen acts as their ultimate prey. When thinking about the feminist themes in the film, the wolves can be seen as predator’s after the innocence of a young girl. There is a great significance in Rosaleen’s story and her change into becoming a woman, represented by what happens during her dream. The performances are mostly excellent, with Sarah Patterson being a stand out, she showed great maturity for her age with her performance and was a joy to watch. Angela Lansbury is excellent as Granny, the role was meant for her and Neil Jordan made the right choice with offering her the role. The only real down side to the performances was Shane Johnstone, who’s eager boy character was very annoying but he over played it.

As a story about becoming a woman and that innocence of childhood ending, this works extremely well. It would make a great companion piece to Ginger Snaps (2000), which has similar themes and is also a female led film. It is a unique film with a fresh perspective on a classic children’s fairy tale, an underrated gem in Neil Jordan’s impressive career.