“Black Swan is a guest review by Joe McGuinness, he is an amazing writer and I think you will enjoy his great review.”

Black Swan is a dark, psychological fantasy drama released in 2010, directed by Darren Aronofsky and starring Natalie Portman, Vincent Cassel and Mila Kunis. It tells the story of Nina (Portman), an aspiring performer within a prestigious dancing company owned by Thomas (Cassel), and how a production of Swan Lake slowly destroys her sanity, fuelled by her rivalry with another dancer, Lily (Kunis). Black Swan is currently in cinemas and is a prime contender for this year’s Oscars.

Though I’ve never seen a production, Swan Lake tells a very depressing story. A girl is transformed into a swan, the Swan Queen, and the only way to break the spell is love. A prince looks set to free her, but then he is seduced instead by a black swan, and out of despair the girl kills herself. The idea for the script was apparently born when Aronofsky’s sister studied ballet and he became intrigued by the insular world the dancers inhabit. He also states that Black Swan is a companion piece to his recent film The Wrestler starring Mickey Rourke:

“…wrestling some consider the lowest art…and ballet some people consider the highest art. But what was amazing to me was how similar the performers in both of these worlds are. They both make incredible use of their bodies to express themselves. They’re both performers.” (source: MTV)

The primary piece of exposition gleaned from the almost awkward early scene in the dancers’ practice studio, wherein Thomas explains to a room full of hardcore ballet performers the premise of Swan Lake – surely they’d already know such a basic bit of information about a well known production? – is the dichotomy between the Swan Queen of the ballet and the Black Swan. The former is the embodiment of innocence and control, while the latter is pure seduction and undisciplined temptation. The twist of the tale being that Thomas wants to cast the same girl in both parts. He chooses Nina.

Portman as Nina is superb. She is a girl from a single parent household, and her mother Erica (Barbara Hershey) is caring but extremely overprotective. As a result she has an underdeveloped, almost childlike view of the world. She is the perfect Swan Queen, an innocent girl often sheltered from harsh reality. However Thomas continues to press her to demonstrate the raw sensuality of the Black Swan, and the line begins to blur for Nina, who even at the start of the film is shown to be a bit of an emotional wreck. She occasionally self harms, and is seen to suffer from anorexia in order to sustain her perceived perfect body image. 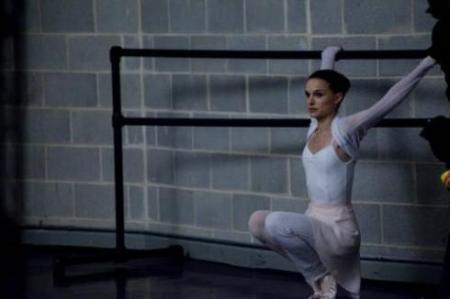 Lily, a relative newcomer to Thomas’ company, does not help Nina’s state of mind. She is as free and undisciplined as the Black Swan – as Thomas describes her to Nina: “Watch the way she moves. Sensual. She’s not faking it.” As the film continues, Nina is constantly battled by her feelings of inadequacy when compared to Lily. She sees herself as lacking some essential quality that everyone else seems to possess, and constantly punishes herself for not achieving perfection, in turn fuelling her need to self harm, which adds to her insecurity. It is a vicious cycle that deepens as the film progresses.

Also interesting is the presence of Winona Ryder as Beth, the company’s former star who has been replaced by Nina. Beth is Nina’s idol – everything she wants to be – and in the murky world of ballet as it is shown in Black Swan, this kind of blind reverence is a dangerous thing. Nina cannot see that she is starting on the same road Beth did years before, and that her career will likely end in the same way – disposed of when age makes her unpalatable for a younger, more attractive talent. She can only see that she is edging her way closer to perfection – to becoming Beth, or as close as she will ever be able to get.

Further to this the film also dissects the very nature of idolism – the dancers are seen to look up to the generation before them, likely because performers like Beth inspired them to seek out the career to begin with. However, the reality is often very different from the image portrayed in the public eye, and though Black Swan has received criticism for potentially encouraging acts like self harm and anorexia, in fact it starkly demonstrates how dangerous believing celebrities to be perfect can be, and the sometimes dire consequences of doing so.

The direction of the film reflects Nina’s deteriorating mental state very well, featuring reflections prominently as she looks to judge herself based on other people’s perception of her. She begins to see a double of herself, representing what she feels she needs to be and her helpless inability to achieve that self-perceived ideal. And the haunting – yet beautiful – score by Clint Mansell accompanies the film perfectly.

Black Swan is a firm contender for every awards ceremony ever established this year, however for if no other reason than to see a quality film, go and see it. Nina tells the story of the ballet to someone during the course of the film, and when he replies that it sounds depressing, she replies, “It’s beautiful, actually.” That’s more or less how best to sum up Black Swan – though it’s often uncomfortable to watch, it’s a film of outstanding quality.